See part one and two of the create districts series.
Based on the polygons created by first using the “Create Thiessen Polygons” tool, then the “Dissolve” tool, the districts are now ready to be edited to fit better with the landscape in which they are located. As you can see, some of the borders between the districts are fairly irregular, while the border between district 5 in yellow and the upper left corner of the blue district is much smoother and follow roads. 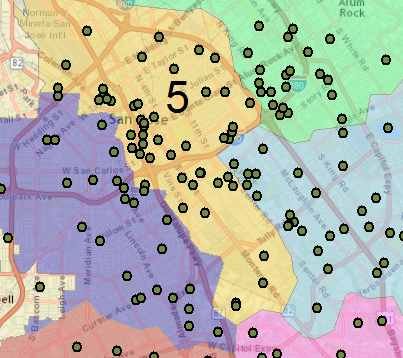 This particular border has been manually edited using the “Modify Edge Tool” from the Topology toolbar. I found it useful to have the streets basemap layered under the district feature layer, and adjust the transparency of the district feature class so that you can see the streets through the top layer. Then, start an editing session using the editor toolbar, before selecting the “Modify Edge Tool”, the second from the left on the topology toolbar, and start to adjust the borders to follow streets or other natural features.

Remember to save your edits when all the borders are adjusted. The result should be a set of district that are easily manageable according to your project's individual needs.

Sources:
https://goo.gl/oYXruR
Posted by Unknown at 10:02 AM